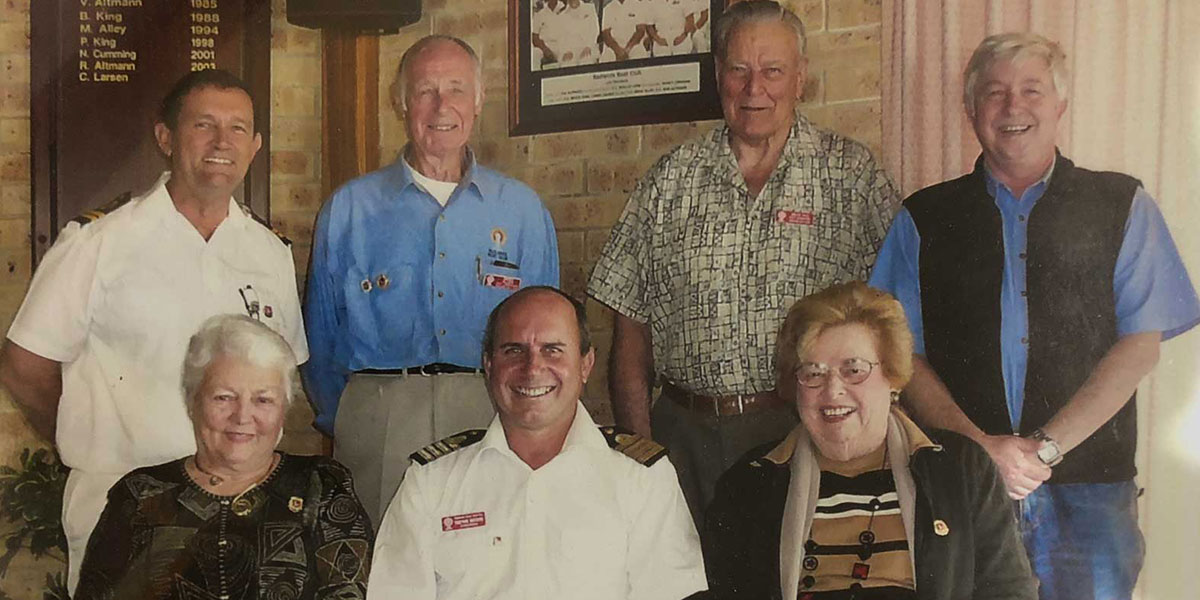 Their years of Committee Stewardship were as follows …

Our three 90’s Flag Wavers thank the Club for their recognition and good wishes, but believe they lived the Glory Days. Starting off, the camaraderie and fund raising for our Safety Net” was intense, while generosity of spirit and fresh ideas gushed like a fountain. Our membership was so varied and interesting, and, all, with the same common need, with Club and Interclub camaraderie fostered. Suddenly, through lots of unseen effort, we were part of “4 Corners Events”, May Cruises (later renamed “The Bay Cruise”), events with RQYS (Manly); Little Ship Club; Southport Yacht Club – interest peaked!  The Halcyon Days had arrived!! Those were the days my Friend – we hoped they never end … Memory Lane!

Before I go, special accolades to families who “shared” their homes, time and effort when we were baseless. There were many, but some who went beyond were The Kings, Altman’s and Williams. This last family hosted our first fundraiser within 2 weeks of our inaugural meeting, and later making space in their garage for monthly meetings. The Altman’s had their home taken over with bulky pre-computer gear – printing equipment, space for magazine collation; Accounts, Storage – not to mention Postage (Bulk) and phone time – over 25 years!  Legends!! The Kings, living closer to the boat ramp, took on “Public Phone” status and Coffee Shop – pre mobile days and nearest phone was the Grand View Hotel.  The Club’s Marine Radio – VN4ED – was housed at the King’s home and attended way beyond the “expected” hours, easing many a problem of a night’s worry. This was eventually taken over by Bob and Darby Lace – Caretakers on Peel Island.

Val and Bruce – Happy Days … “Memories stir the heart because there was Magic in the way it was.”