Mission Beach to Airlie Beach – 1st to 6th May

Next day up early and head to Townsville to pick up the crew at the airport and then onto Mission Beach.

Sunday was registration and scrutineering with both skis passing.  As on-water officials Kris and I attended the Virgins briefing that outlines what they can expect on Jet Trek.  The event is managed by having teams of no more than 15 PWC’s controlled by two on-water officials, one to lead and the other to sweep. The entire fleet have two support boats, one with a trained medic on board, on the water with them at all times.  The teams leave in 10 minute delays to allow clean water for the following team.  Members wear a coloured vest that identifies their team.  We were Team White.  The road crew also have a captain who is the primary point of contact in case of instances where a PWC needs to be pulled out of the water.  This year Paula was the White Team captain.  Team White was made up of riders from Victoria, Brisbane, Gold Coast, Yeppoon and Mackay.

Day One – Mission Beach to Lucinda

Monday morning and with an excited White Team we launched in rainy conditions.  We headed off to Cardwell to meet the road crew for lunch and grab some additional fuel. A great lunch was catered by the Cardwell State School P&C.  Conditions were a bit bumpy, giving us the opportunity to observe each team member’s riding ability.  The afternoon saw us on the outside of Hinchinbrook Island on our way to Lucinda, making it to the ramp by mid-afternoon allowing plenty of time to refuel and enjoy an ale or two.  Accommodation for us was at the Lucinda Fishing Lodge, located on the river with its own private pontoon to tie up.

The sun welcomed us today, however, the sea was still quite choppy in parts.  A quick run alongside the Sugar loadout with some photo opportunities from the support boat followed by a direct run to Townsville.  The permit did not allow us to stop at any of the islands, so any necessary refuelling was to be done on the water.  Arrival in Townsville was early afternoon for a BBQ lunch prepared by the VMR 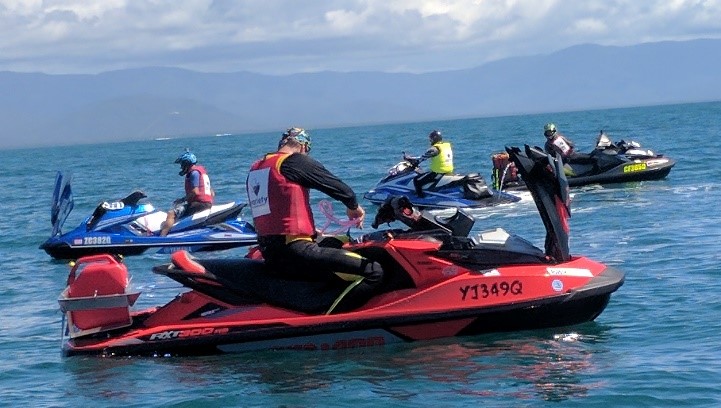 This run was quite large with 205km planned, and the conditions were not favourable.  The morning run to Alva Beach, our lunch stop, was reasonable with some flat water which enabled the skis to be opened up and enjoy the thrill.  The creek in to Alva Beach was quite shallow with the bottom of the skis touching in places.  The tide was still going out and this meant the skis were beached during lunch.  One of the other teams arrived with an injured rider and an ambulance was arranged for transport to the hospital in Ayr.

After dragging the skis off the sand the afternoon run started with some chop that only got worse as the day wore on; the sea around the Abbott Point Coal Loadout was particularly impressive.  We hugged the coast line more than the planned route in the hope of finding flatter water, which meant we ended up doing 230 km for the day.  Reaching the Bowen headland at sunset and finally arriving at the boat ramp in the dark, made even more difficult due to the areas lighting still being out due to the cyclone, was quite an experience.  The riders spent 11 hours from the launch at Townsville to the Bowen boat ramp of which 9.5 hours was actually riding; a big day.  Road crew were quite relieved when their riders arrived at the ramp.

3 – Support 2, helping to keep everyone safe, came all the way from Bathurst for the event

After such an eventful day, the prospect of chilling for the day in Bowen was well received.  Many spent the day enjoying the rest, participating in the lay day fund raising activities, or a leisurely lunch at the Grand View pub.  War wounds were addressed, many with blisters and sore legs. 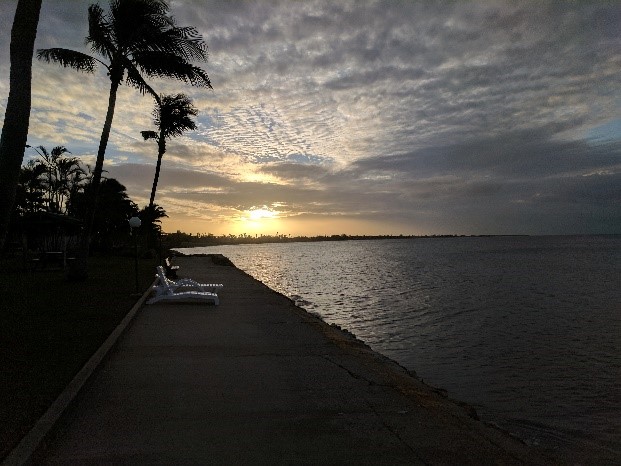 Unfortunately the weather only got worse, with the BOM issuing a strong wind warning for our part of the coast.  This meant that due to Variety’s permit from the Great Barrier Marine Parks Dept., we were unable to ride.  So it was on the trailers for a drive to Hydeaway Bay and Montes Resort for lunch.  Some were probably relieved that they got another day of rest.

The event then moved into Airlie Beach

As a result of the damage caused by Cyclone Debbie the events planned on Hamilton Island were changed and everyone enjoyed two nights in Airlie Beach.

The last day of riding was shortened due to the strong wind warning being in place.  The revised route did not have us crossing the Whitsunday passage.  Winds were observed to be 29 knots gusting over 30 with 3 metre seas.  However, that was not going to stop the Jet Trekkers.  The run was across to the Mole Group of Island, and a visit to the South Mole resort which incurred considerable damage, and then a run around Daydream Island which has been shut due to the extensive devastation.

After the ride there was a cruise over to Whitehaven Beach for lunch, with those on board the large cruise boat stating it was quite bumpy.

The event finished with a gala ball at Abell Point Marina with awards being announced.

In total the event made a net profit of $270,000 for Variety which will go a long way to helping disadvantaged kids and families.  A truly amazing result and the largest to date.  There were 90 PWC’s involved with a total of 217 people. 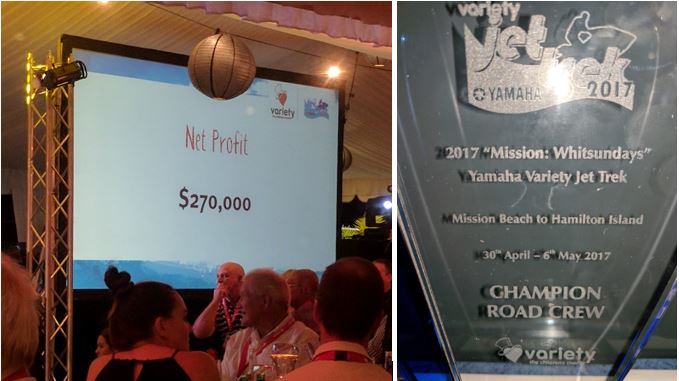 Some statistics from our Team D8on

During the week, Variety made the following grants to some very worthwhile recipients:

We would like to thank all the people who supported us this year, without your generosity we would not be able to provide much needed funding to Variety so they can help kids Live, Laugh and Learn.

Next year will see Jet Trek travelling from Sydney to Yamba in late March.

If any member of the Redlands Boat Club would like to be involved in next year’s event, please do not hesitate to contact me via the club web site. 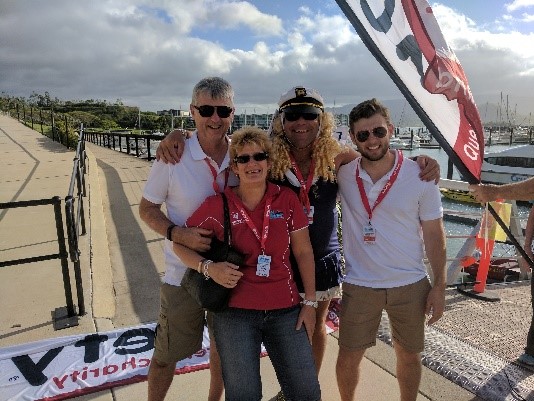 A very brief trailer of the video produced by the 7 Media team can be viewed by clicking this link: www.youtube.com/watch?v=OLpiKUtyY-4&t=18s