Queensland Parks & Wild Life report that the first of the migrating whales has been sighted off Byron Bay!  This year promises to be a bumper season for whales with an expected increase in

whale migration of 10-15%.  This of course makes for a great opportunity for boaties to get out there and enjoy this seasonal migration spectacular.  However, there are rules around approaching whales and dolphins to ensure the safety of the whales and boaties!

There are a number of rules that are in place to make sure marine mammals can live naturally in Queensland waters without being disturbed, while at the same time allowing us to watch them in safety.

An explanation of these rules is provided here. A full description of these regulations can be found on the Office of Queensland Parliamentary Counsel website (PDF)* (https://www.legislation.qld.gov.au/LEGISLTN/SLS/2013/13SL061.pdf ). Penalties apply.

Approach distances for whales and dolphins

Approach distances reduce the risk of disturbing whales or dolphins. They apply to boats, prohibited vessels (including jet skis and hovercraft), aircraft (including helicopters) and people who are in the water.

Approach distances for dugongs only apply where a Special Management Declaration has been made.

Approach distances are divided into caution zones and no approach zones.

The ‘caution’ zone is an area surrounding a whale or dolphin in which boats cannot travel at speeds of more than six knots or speeds that create a wake. The caution zone extends out 300 metres from a whale, and 150 metres for a dolphin. 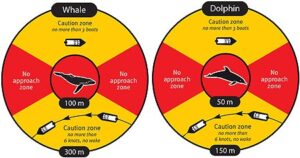 Something to think about…

A fully loaded semi trailer weighs 36 tonnes. A fully-grown humpback whale weighs up to 45 tonnes. You wouldn’t stand in front of a moving semi-trailer, so why would you put your boat in the way of a whale?

When a marine mammal approaches a boat

If a dolphin approaches a boat within the caution zone or the no approach zone, a moving boat can continue on its way as long as any change in speed or direction is made gradually in a way that is unlikely to disturb the dolphin, particularly if it is bow riding. The boat may even slow down or stop to watch the dolphin providing it does so in a way that does not disturb it.

When a marine mammal appears disturbed

If a marine mammal shows signs of disturbance (e.g. acting in an aggressive manner, changing its breathing patterns) a boat must withdraw beyond the caution zone at a speed that is not more than six knots so as to not create a wake.

In the Great Barrier Reef Marine Park and other Commonwealth waters, boats must not come within 300 metres of a whale calf or within 150 metres of a dolphin calf. If a calf appears, causing a boat to be within a no approach zone, the boat should stop with the engines turned off or the gears disengaged, or the boat should withdraw at a slow, constant speed.

The Special Management Declaration framework gives marine mammals additional protection when it is required and provides a flexible and streamlined management tool for responding quickly to situations where marine mammals are under threat.

At present there are two permanent Special Management Declarations. One has been made declaring Migaloo ( https://www.ehp.qld.gov.au/wildlife/animals-az/whales.html#migaloo ) and other humpback whales that are more than 90% white to be special management marine mammals. This means boats and prohibited vessels cannot approach within 500 metres of a predominantly white whale and aircraft cannot approach within 610 metres.

The second permanent special management declaration is the Whitsunday whale protection area. In this area, a no approach zone of 300 metres is in place for boats.

Special Management Declarations can be made in different situations including when: